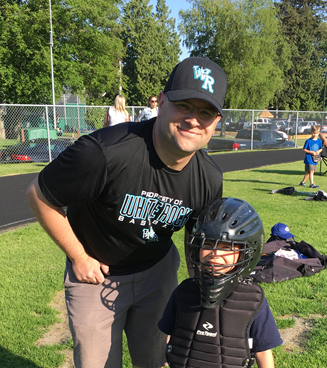 I would like to recognize Trevor Harvey as a head coach. He does amazing with the kids on the team. He is a team leader who gets to practice early and always stays late. And while the game is on he helps other coaches coach better with their kids. Always a good word to be said about Trevor from parents from his team and other teams.

Trevor Harvey’s  love for baseball started with his Dad Dwight.

Trevor’s Dad coached for 17 years. With that coaching the kids on those teams grew to love baseball with a passion and a lot of those players still play today & coach their own teams. With fatherly love, Trevor grew up playing baseball and now loves being a coach himself. For the last 2 years he has been coaching his child’s team. Trevor goes beyond what’s expected with his team mates and his children’s team. He’s always there early and he leaves late. He gives it his all with coaching. Always helps and gets the team in great spirits throughout the game. The kids the last 2 seasons have learned so much and have become better players and a better team mates with him as a coach. Please consider him as he has gone far above the call of duty with being a coach and team player.