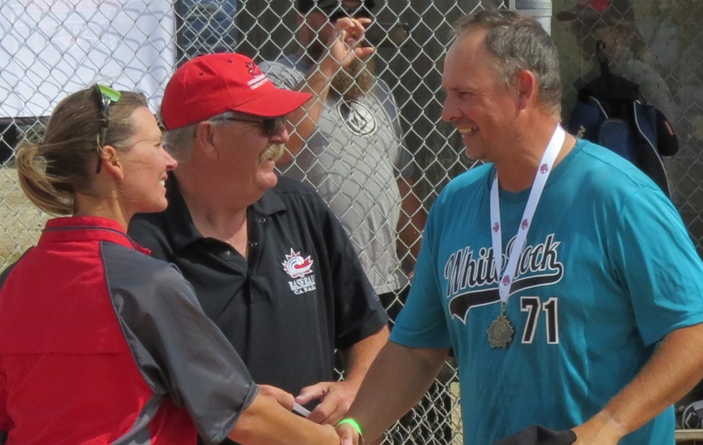 On behalf of my family, I would like to recognize Todd Nadon.

Todd is first and foremost the father of a very busy family. We have had the great fortune to have Todd coach our son James for a number of seasons, both spring and summer, however,  Coach Todd dedicates countless hours year after year to the White Rock South Surrey Baseball Association, doing what ever it takes.  He has served on the board year after year, coached the kids but most importantly helped develop boys into young men.  Even when he intended to take a step back and allow others to help provide direction for the association, Todd found himself volunteering to fill open positions.  Todd also “stepped to the plate” again recently when the Bantam team was waiting for coaches to be selected.  He stepped in and helped to organize tryouts and get things rolling so their season could start on time and the team ready to go.

Todd is certainly a straight shooter who tells you the way it is.  While some folks may find him a bit “prickly” he has always welcomed our whole family … even bringing our younger son Martin into the dugout as the bat boy when he coached James’ 2018 Peewee AAA Summer group to victory at the Western Canadian Championship in Brandon, MB.  He certainly helped to keep James involved in the game a couple of times.  Once when coming off a severe hockey injury and missing a whole summer season, Todd encouraged James to continue on with baseball the following spring and developed him as one of the pitchers on his team.  The other time he helped James stick with the game was his second season of Mosquito when the association was not allowing the teams to be tiered.  While Todd did not know it at the time, it was the anticipation of playing ball for Todd in the summer that really kept him going through that spring season.  Todd made baseball fun!

Todd is incredibly knowledgeable about the game.  He would always provide batters the signs, know the count, know the score, know where the pitcher was on pitch count, know who was on deck, who was in the hole, control the bench, “discuss” a play or a rule with an umpire, remind the players of the situation, make a line up substitution, cheer on the kids, educate anyone who was willing to listen and made sure the players treated the game with the respect it deserves.  There were numerous times that Coach Todd would have to call practice on the count of darkness as the kids would stay late after practice to play scrub as long as they could…they just couldn’t seem to get enough.

As it seems to be “Tradition” in White Rock Baseball, Todd’s teams were successful.  There have been numerous successes in both local and travel tournaments (which Todd organized for his teams) which is a testament to his coaching and keen eye for the details in preparation.  Lastly, once James aged out for Peewee, we did not know what to do for baseball and it was Todd who helped chart a path for James to help keep him involved with the game.  Thanks for all you have done Coach Todd!