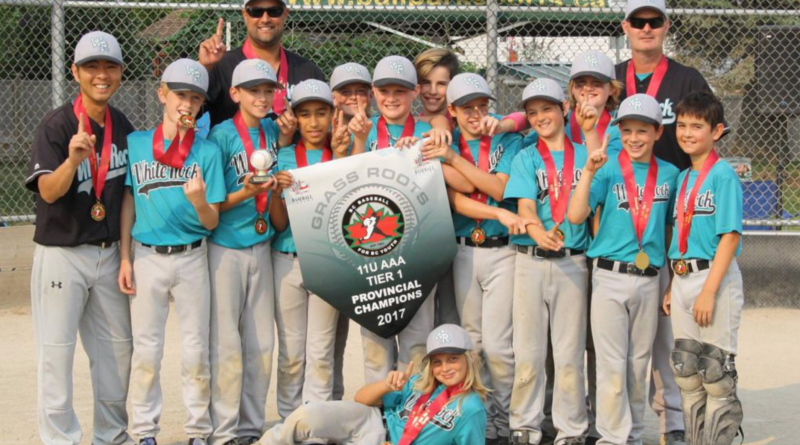 The White Rock 11U AAA Tier 1 Tritons won the provincial title on the August long weekend in Cloverdale, capping off an amazing 26-1 season.

The tournament began on the Friday against Cloverdale, with the boys coming back to win a hard fought game 9-8. The game was highlighted by a 1st inning 3-run homer from Ben McKinnon to keep the game close, scoring Matty Ng and Vasya Seymour. In the 2nd, the hit parade continued, with Max Ross hitting a triple to score Austin Hexter. Consecutive doubles by Ben, then Jack Clayton pushed the score to 7-4 White Rock. Later in bottom of the 5th, White Rock found themselves down 8-7 when Vasya hit a game-tying solo shot on the first pitch of the inning. Tyson Craven had the go-ahead RBI on a double. Ben then entered the game in the top of the 6th to preserve the win.

Friday afternoon, White Rock had a statement game, shutting out Nanaimo 15-0. Zak Burden and Max Ross pitched a combined no-hitter, as the team played error-free defence behind them. Matty had a big day at the plate, going 3-for-3 with 2 doubles and a homer, good for 5 RBI on the game.

On Saturday morning, the team suffered their first loss of the season, losing to Abbotsford in a slugfest. The boys jumped out to a lead in the 1st inning on a RBI single by Garin Wickstrom, but found themselves trailing going to the top of the 6th. Jack hit a solo shot, and Sam Manship scored with some heads up base running on a passed ball to make it close, but the final ended up as 11-8 for Abbotsford, setting up a must-win game later in the day.

Saturday evening, the boys punched their ticket to the playoff round with a 13-2 win against Kamloops. Max Ross came to the mound in the 2nd inning, and pitched an efficient 4 innings, using just 51 pitches, and allowing just one earned run. In this game, Danny Berringer hit a long double off the fence, and had 3 RBI on the day. The game ended on a dramatic walk-off grand slam homer by Ben in the bottom of the 5th to put the mercy rule into effect.

Sunday morning’s semi-final game showed that this team scores from anywhere in the lineup. 9 different Tritons players had at least one RBI, and every single player scored at least one run in a 19-6 win. White Rock had 4 home runs in this game – Ben with 2, while Danny and Sam Persaud hit one each.

The final game was a back-and-forth affair, with White Rock coming back from 1-0 and 3-1 deficits to eventually tie the game and win the championship in extra innings. After Abbotsford took a 1-0 lead in the bottom of the 2nd, with 2 outs in the top of the 3rd, Matty hit a long double off the top of the left field fence, scoring Zak to tie the game. Top of the 4th with 2 out, trailing 3-1, Jack launched a huge solo homer to straight away center, hitting the concession stand before it landed.

The Tritons were still down 3-2 until the top of the 6th inning, their last chance to tie. Matty reached on a walk, and advanced to 3rd on consecutive passed balls. Vasya Seymour then sacrificed on a grounder to the 1st base side, scoring Matty to force extra innings.

The game stayed tied until the top of the 8th inning. Then, as they have done all season long, the Tritons started a long rally – this time from the 8 spot in the order. After Sam Manship grounded out, Sam Persaud singled on a liner to left, Max Ross singled on a beautiful bunt, and Danny walked to load the bases. Persaud scored the go-ahead run on a passed ball, while Zak battled hard but popped out on an 8 pitch at-bat for the second out. With 2 outs and 2 on base, Austin Hexter hit a towering fly to right for a 2-RBI double, making the score 6-3 Tritons. Matty, Vasya, and Ben all singled to run the score to 9-3 when the inning ended on a strikeout.

Abbotsford rallied for 2 runs in the bottom of the 8th, but the game ended when Austin fielded a grounder at 3rd and threw to Zak at 1st base for the final out. Persaud and McKinnon had combined to pitch a great 8 innings, each of them striking out 7 batters.

This team went undefeated in all their tournaments, and all their league games throughout July. Their only loss on the season was to Abbotsford in the provincials. The hallmarks of this team are depth of pitching, and hard hitting from anywhere in the lineup. All 12 of the players on this team threw from the mound in a game, and all 12 had the power to hit the ball out of the park.

Huge thank you goes out to the great group of families that were so dedicated, and all of the players that put in the work, and were so determined to learn and grow throughout the season. Congratulations to all of the White Rock baseball teams this summer!