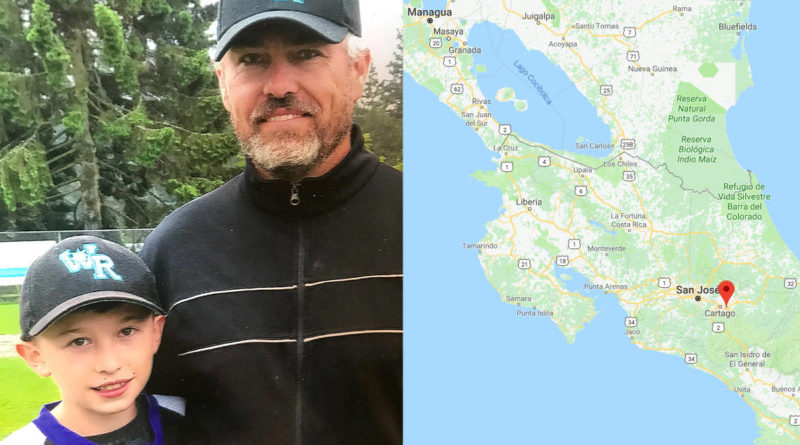 The following article appeared on Peace Arch News, Dec 15, 2017. The pictures at the bottom are from Brian Young and family taken in Costa Rica.

A Semiahmoo Peninsula family left this week for Costa Rica, where they plan to spend the next month distributing baseball gear and running clinics in small town of Paraiso.

Brian Young and his 11-year-old son, Brody – a member of the White Rock-South Surrey Baseball Association – will lead the clinics, helping not only youth learn the game, but also the town’s local coach – a man named Joseph who, the elder Young explained, organizes everything from soccer to dance to music in the small Central American town.

“In Costa Rica, there’s a love of baseball there – you can tell when you talk to people – but there’s really no infrastructure or equipment to play the game,” said Young, who has been travelled to the country for business for the last decade.

“Soccer is number-one by far – they actually make baseball for Major League Baseball in Costa Rica, but not that many people play. Nicaragua, just to the north, and Panama just south – those are big baseball countries, but soccer is just easier to play because all you need is a ball.”

The Youngs are bringing with them not just their baseball expertise, but also a team’s worth of equipment – an equipment bag, bats, catcher’s gear and bases donated by WRSSBA, as well as about a dozen gloves which were donated when “a couple families got together.”

Young, who connected with Joseph through a mutual friend in the country, said it was important to him to hook up with an established sports group in Paraiso, but sports – and other activities – are much more loosely organized there than at home. Joseph, he said, is “the guy” in town who organizes youth sports and stores equipment.

“We didn’t want to just bring all this stuff down there and have it disappear – we wanted someone to look after it, be in charge of it,” Young explained.

“The key is to involve some local people. I’ve done things in the past where you come in a build a school, or things like that – but if you don’t involve the locals, and get them involved, it doesn’t stick. If they do it with you… they’ll feel some ownership of it.”

Young said Brody was also “very excited” to teach other youngsters the sport, though Young admitted that the language barrier could prove to be a roadblock, at least in the early going.

Young added that after this first visit, they’ll return again in the spring, with the eventual goal being to have enough equipment to outfit two youth teams. As well, they’ll look to convert one of the many small soccer fields in the area into a baseball diamond, so youth have a place to play longterm.