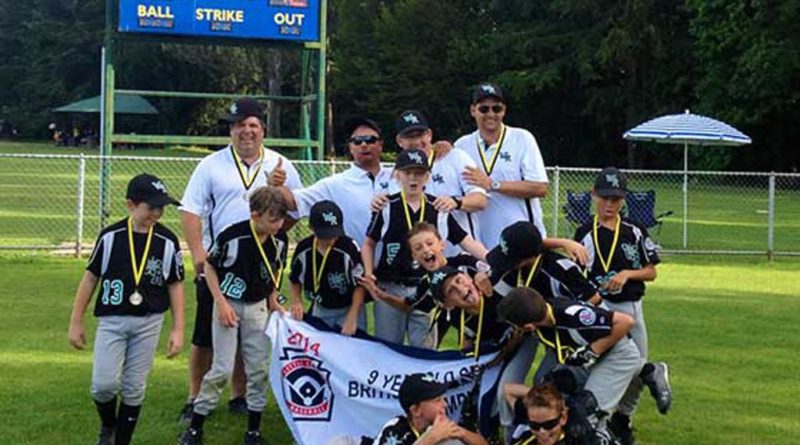 Our 9 year old team started the post season of in Kelso, WA. We had a great result finishing in second to a team from West Linn (Portland) that were a club team that had already been together for over 15 tournament games. We were very pleased with the result. We defeated the host Kelso team 4-3 in the semi final coming from behind with 2 runs in the top of the sixth inning.

Our District Tournament was a real success. We went undefeated (7-0) and outscored our opponents 93-16 along the way. We defeated the host team Langley 12-1 in the semi-final and then faced Hastings in the final. Last year we were runner up in two tournaments to Hastings.

This year in the final against Hastings we got off to a typical strong start with 3 runs in the top of the first inning compliments of singles by Ty Fluet, Kyle Chyzowski and Matteo Manzi. Reid Hefflick pitched the first three innings, striking out 6 Hastings batters and giving up two singles and allowing one unearned run. Landon Munro closed out the game pitching the final two innings before the mercy rule was enforced, striking out three batters and giving up no runs.

The score of the game was 3-1 going into the top of the third which was the first time White Rock and been in this close of a contest in the tournament. Ben Chowen and Landen Gulutzan led off the inning with back to back singles. Then after Ty Fluet reached first on a walk, the bases were loaded for Reid Hefflick when he hit a grand slam to put White Rock comfortably in the lead 7-1 after 3 innings played. White Rock scored one run in the fourth compliments of hits from Landon Munro and Lachlan Scardina. White Rock then added four more in the fourth. Final score was 12-1.

Our last tournament was in Everett Washington where we were semi-finalists, losing to the eventual tournament winners from Marysville, WA.